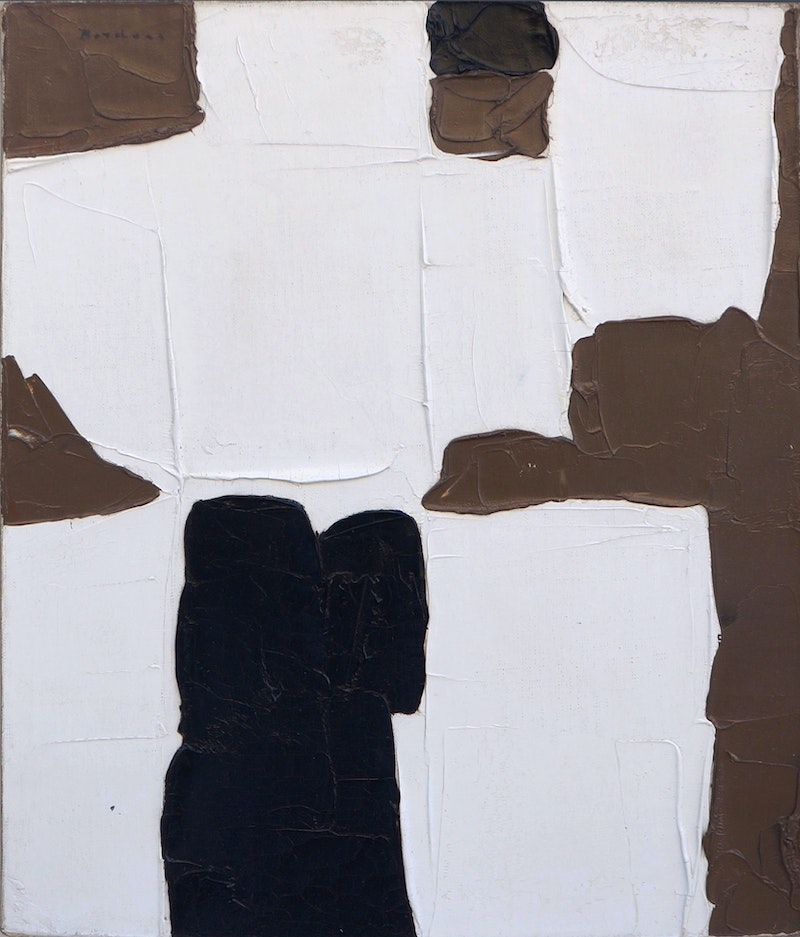 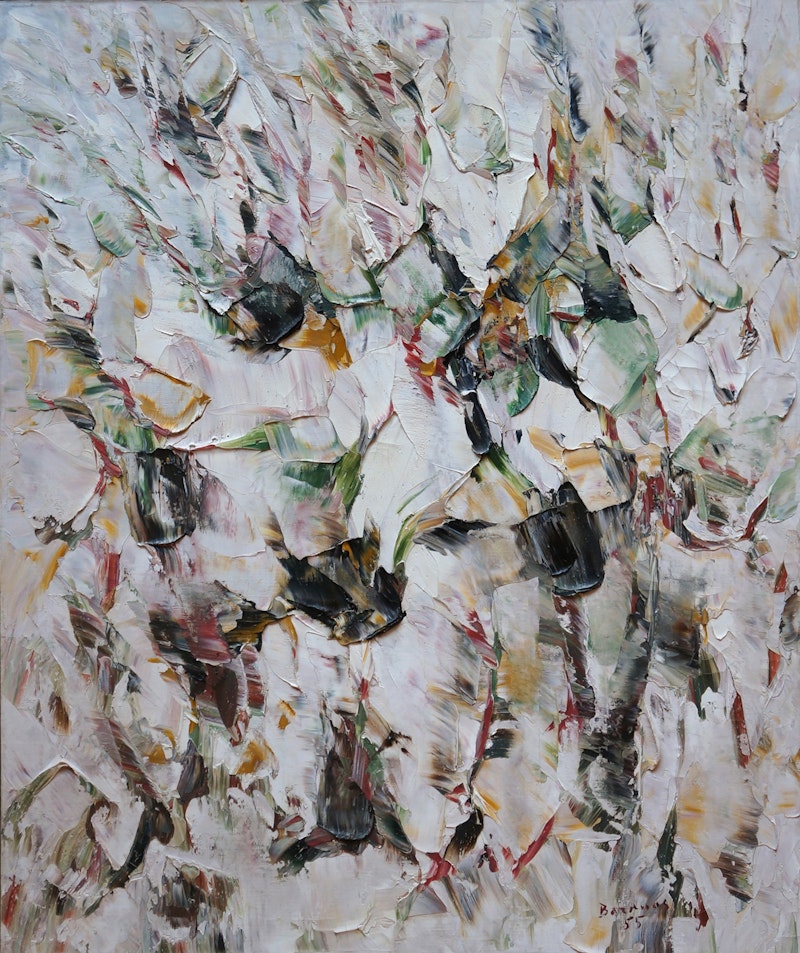 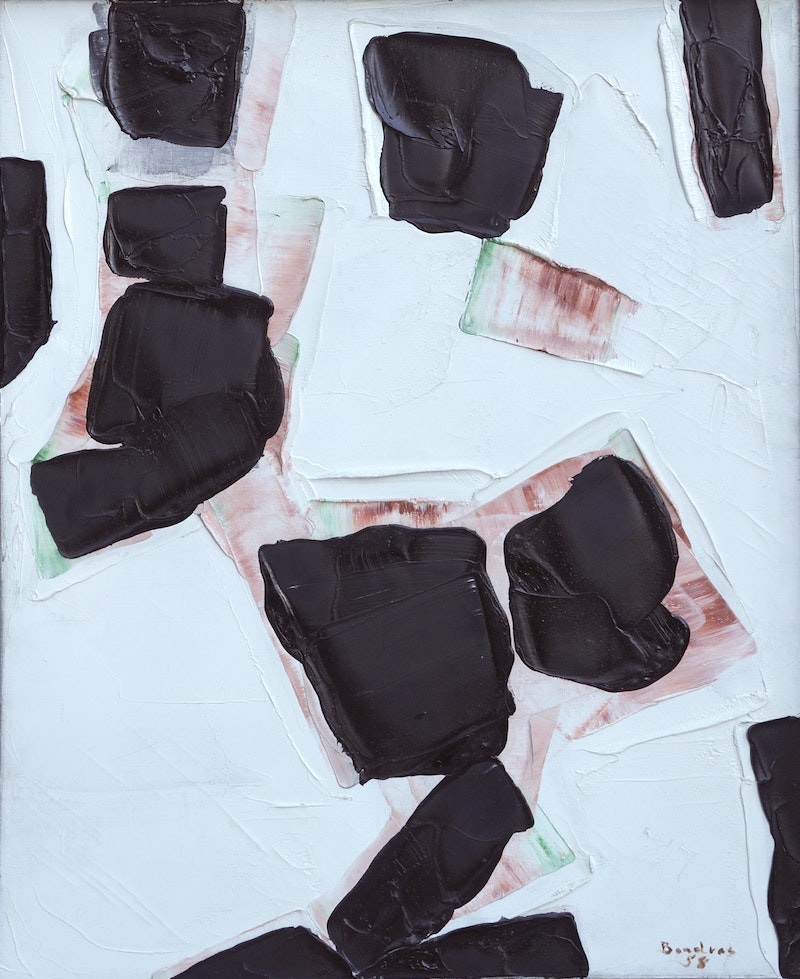 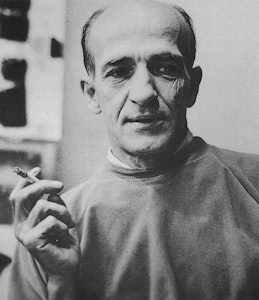 Born in St. Hilaire, Quebec in 1905, Paul-Emile Borduas was a Canadian painter known for his abstract paintings. He received five years of formal elementary school education, (which ended at the age of twelve) and received some private lessons from a village resident. At the age of sixteen he became an apprentice to Ozias Leduc, who was a church painter and decorator. Leduc provided Borduas with a basic artistic training, teaching him how to restore and decorate churches. Leduc arranged for Borduas’ instruction at the Ecole Technique, in 1919, in Sherbrooke, Quebec. In 1923, assisted by a scholarship Leduc had secured for him, he enrolled in the Ecole des Beaux-Arts de Montreal, continuing to work for Leduc at the same time. He received prizes for his paintings at both of these institutions.

Upon graduation in 1927 Borduas was hired by the Montreal Catholic School Board as a high school art teacher. In January 1929 he began studies at the Ateliers d’Art Sacre in Paris, which he left to pursue church decoration work of Rambucourt, in the Meuse Valley a few months later. He returned to Saint-Hilaire in June 1930 (his funds being depleted), began teaching part-time, and in 1933 returned to teaching high school for the Catholic School Board of Montreal. In 1937 Borduas began teaching at l’Ecole du Meuble.

In 1938 he encountered John Lyman, a Montreal painter and critic, at the first exhibition of one of Borduas’ paintings. Lyman encouraged Borduas’ involvement with the Contemporary Arts Society, and in January 1938 he was elected vice-president of this group. In 1941 he resumed painting after several years of study and teaching, during which time he and a group of students had met regularly to discuss recent trends in European art. His first abstract paintings date from this year, and in April 1942 he exhibited forty-five gouaches inspired by the abstract surrealism of Joan Miro. He became increasingly involved with about a dozen of his students, and they became known collectively as the Automatistes for their attempts to paint with pure psychic automatism as per the writings of Andre Breton. In January 1946, the first group exhibit of Borduas and his students was held in New York City, followed in April by an exhibit in Montreal. This was the first exhibit by a group of abstract painters in Canada. A second Montreal exhibit followed in February–March 1947. A critic, responding to this exhibit, coined the name “Automatists” for the group, after Borduas’ painting Automatisme 1.47.

Borduas wrote “Refus Global” (or “Global Refusal”) in late 1947- early 1948. It was distributed in a folder that contained other Automatists’ writings. This piece was originally intended to accompany an Automatist showing, however it was actually distributed alone. “Global Refusal” served as an important manifesto that advocated the separation of church and state in Quebec, especially for the arts. Borduas was dismissed from l’Ecole du Meuble as a direct result of his involvement in this social critique. Even those who had tired of the repressive Duplessis regime, and advocated great social changes in Quebec, were reluctant to back Borduas’ thorough condemnation of the Catholic Church—such a central influence on the French Canadian populace.Borduas was ostracized, he was unable to attain employment and this was necessarily problematic as he was a father. He decided to take matters into his own hands. Borduas produced another piece in his defence, “Projections Liberantes” (“Liberating Projections”), which he completed in February 1949. Unfortunately, this more moderate composition, which clearly communicated Borduas’ intentions in releasing “Refus Global”, was not enthusiastically received by the public or the presses.

Want to get notifications or exclusive online offers for artwork by Paul-Emile Borduas? Add them to your collector profile and let us know what you're looking for. 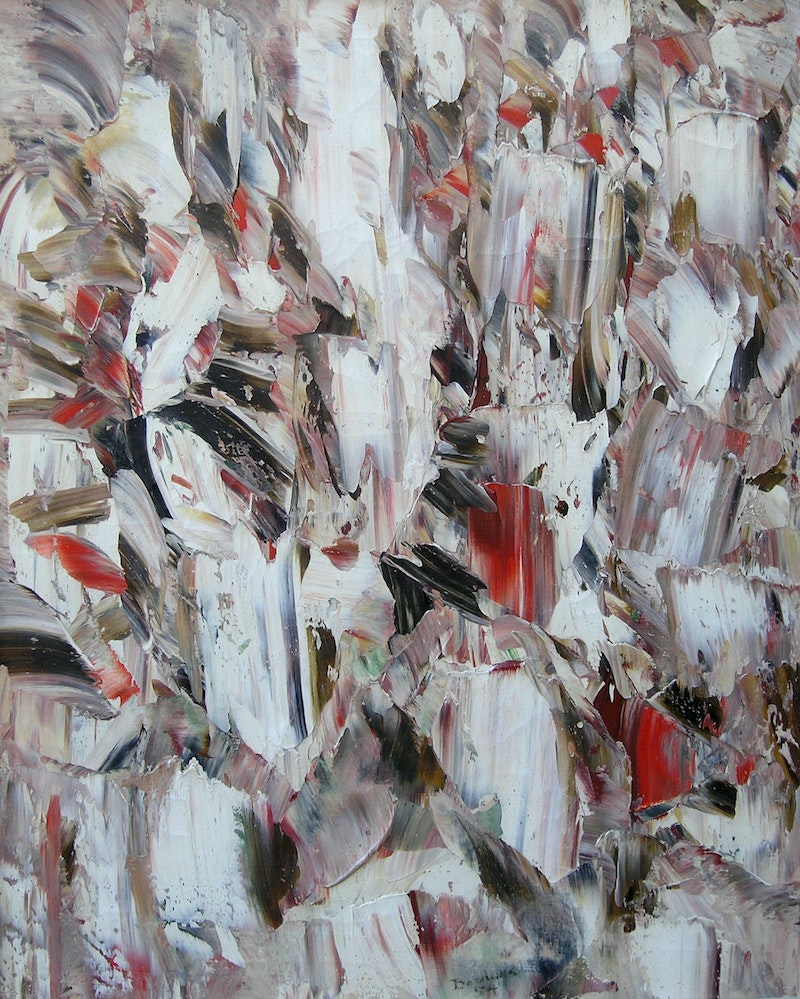 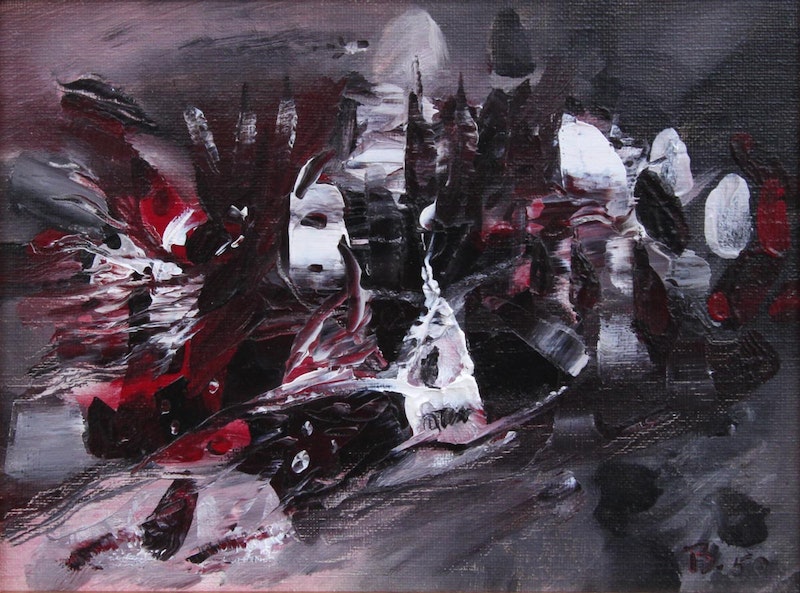