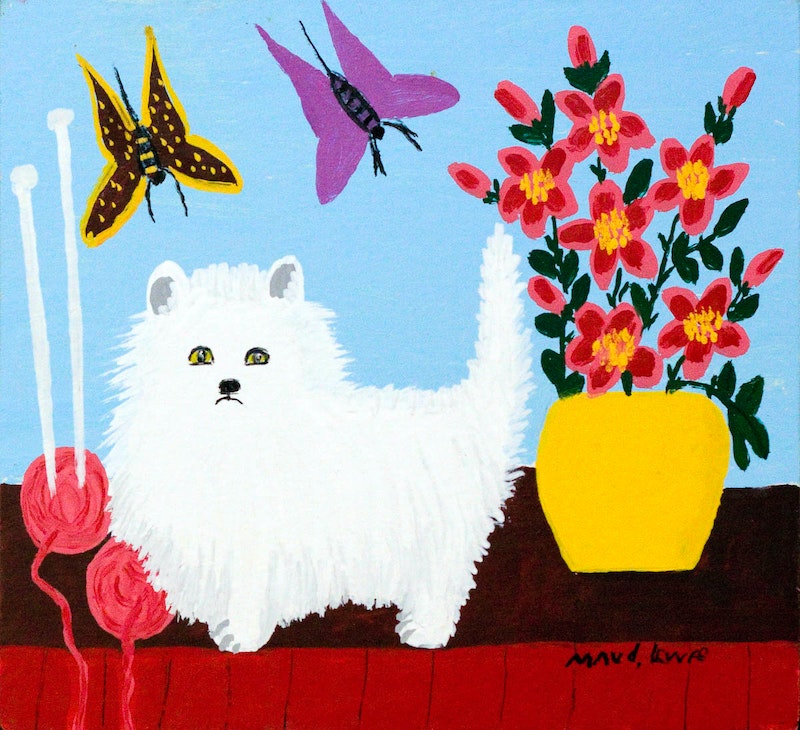 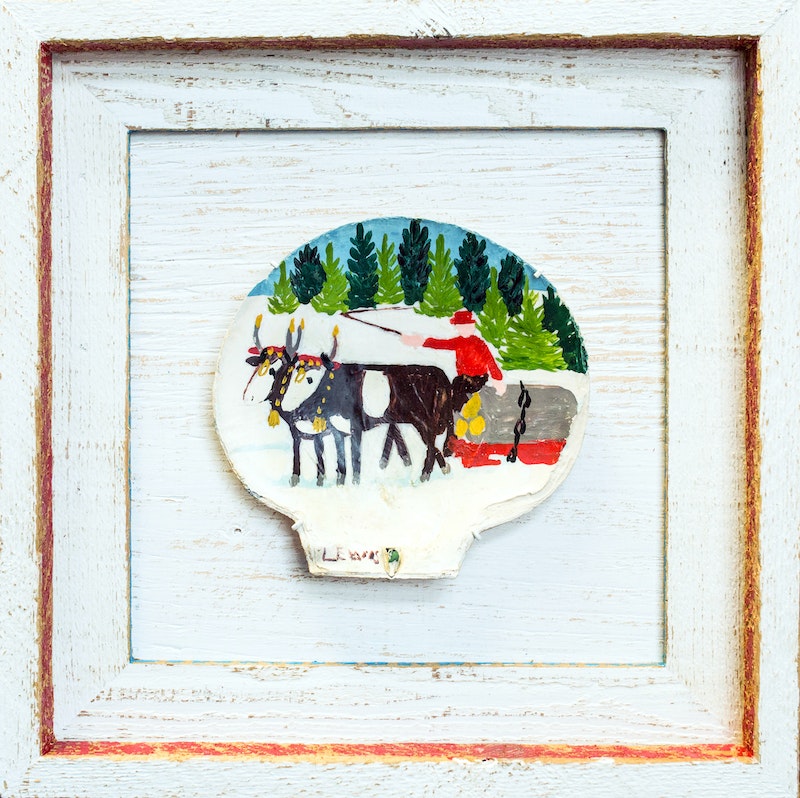 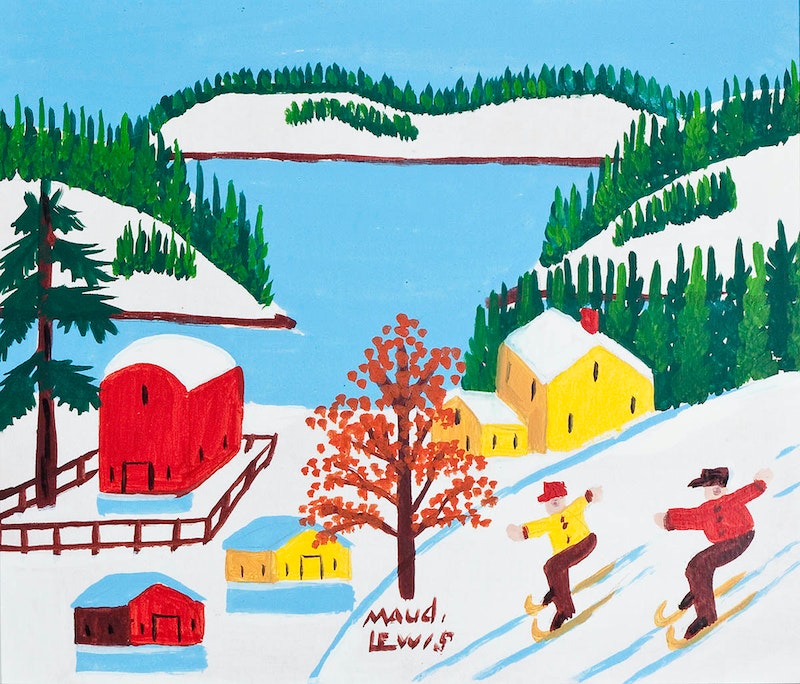 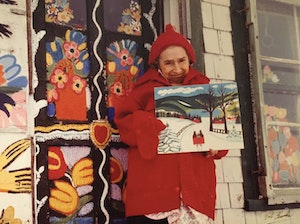 Maud Lewis exemplified the simple life. But simple doesn’t mean dull. The simplicity of her paintings, brushed initially with scrounged paint from local fishermen onto ubiquitous green boards and post cards, continue to evoke feelings of innocence, of childlike exuberance as enduring as the spring times she loved to paint. And today she still captures audiences intrigued by everyday scenes as diverse as hard-working oxen and whimsical butterflies._ Maud Dowley Lewis was born March 7, 1903 in South Ohio, a community near Yarmouth. Her father Jack would provide a moderately prosperous living as a respected craftsman, making harnesses and serving as a blacksmith. Agnes, her mother, favored artistic pursuits including painting, folk carving and music. Born disfigured with sloped shoulders and her chin resting on her chest, Maud led a confined but happy home life after she quit school at 14, perhaps in part to escape the mocking of her peers. “What is life without love or friendship?” she once confided to a friend. Her mother lovingly taught her to play the piano before arthritis crippled her hands. Physical deformity may have been her lot, but even more tragic was the loss of both her parents within two years. Who would care for Maud? Thankfully, an aunt who lived in Digby took her in. There she would later answer a newspaper ad that would determine the course of her life. A man named Everett Lewis wanted a housekeeper for his cottage in Marshalltown. She married him in 1938 at the age of thirty-four and would never travel more than an hour’s drive from her birthplace. “I ain’t much for traveling anyway,” she said later, “as long as I have a brush in front of me, I’m all right.” Cameo cigarettes added their share of comfort as well. Although short in stature with hands gnarled by arthritis as the years passed, she stood tall when she plied her brush over green-backed particle board. Everett Lewis, a stingy, parsimonious but certainly hard-working man, kept house and made meals allowing Maud to spend most of her time delving into her world of wonder and creating fanciful works of art. Maud gathered images from her happy childhood and limited excursions in a Model T with Everett to paint cheerful images on dust pans, scallop shells and even on her house. They would settle into a routine where Everett enjoyed peddling and haggling over the paintings Maud would love to paint. The happiness she painted first attracted neighbours, then tourists and eventually even international attention. It started with a Star Weekly newspaper article and then a 1965 CBC Telescope program featuring her unique works. Her notoriety began to bloom like the cherry trees that garnished several of her paintings. Orders came in so fast that the paint hardly had time to dry–one reason you may notice fingerprints on some edges of her paintings. Her style became as fanciful as her subjects. She painted a world often without shadows, autumn leaves on winter landscapes, and even 3-legged oxen. Was she adding humour in her subtle, shy way? Her gentle nature and magnetic smile might give that away. Awkwardly bent over a painting, she may have been squinting and intense, but her inner joy escaped onto her panels with unrivaled determination and vitality. Small wonder her work garnered the attention of even the Nixon White House. Ever pragmatic, Maud wrote to ask that funds be forwarded before she sent the requested two panels to the President! Today her work unequivocally demands status as “important art” in numerous fine-art collections around the world. Much like her American counterpart, Anna Marie Robertson (Grandma Moses), Maud was uniquely creative, self-taught, specialized in painting everyday rural life, loved animals and appreciated the beauty of nature. Both initially sold their paintings for just a few dollars, but saw their work increase dramatically over the years. The works of Grandma Moses command prices in the $30,000 to $600,000 range. Of comparable quality, Maud’s paintings currently fetch $6,000 to $20,000, holding much promise for the future. Not formally trained, Maud adopted a style that emerged from inside the heart of a true artist. As such, she could produce images of enduring quality and appeal, images that transformed her maritime surroundings into painted visions. The irresistible charm of her art had triumphed over the arrows of adversity.

Mayberry Fine Art and our clients are actively seeking works by artist Maud Lewis for purchase or consignment. Contact us for confidential assistance when offering a work by Maud Lewis for private sale.

Want to get notifications or exclusive online offers for artwork by Maud Lewis? Add them to your collector profile and let us know what you're looking for. 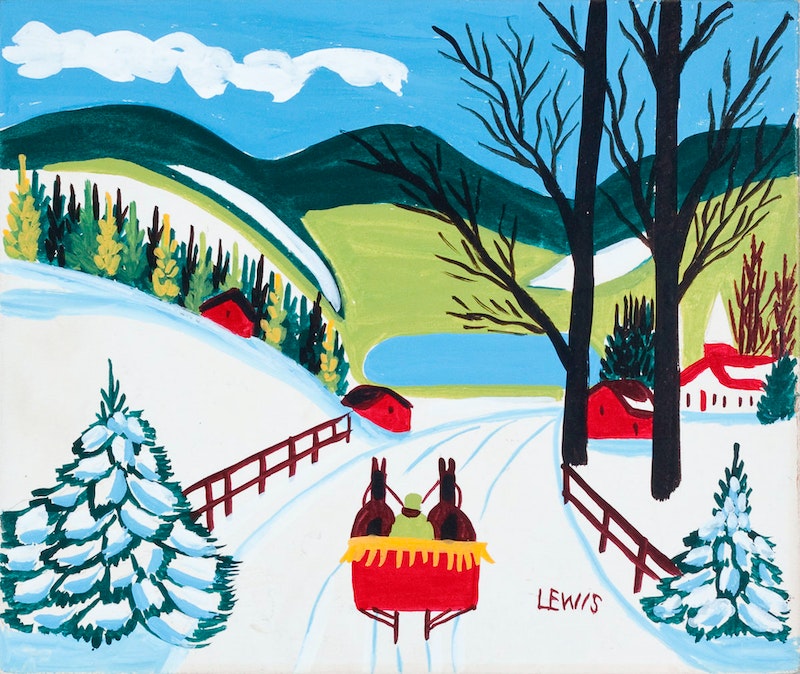 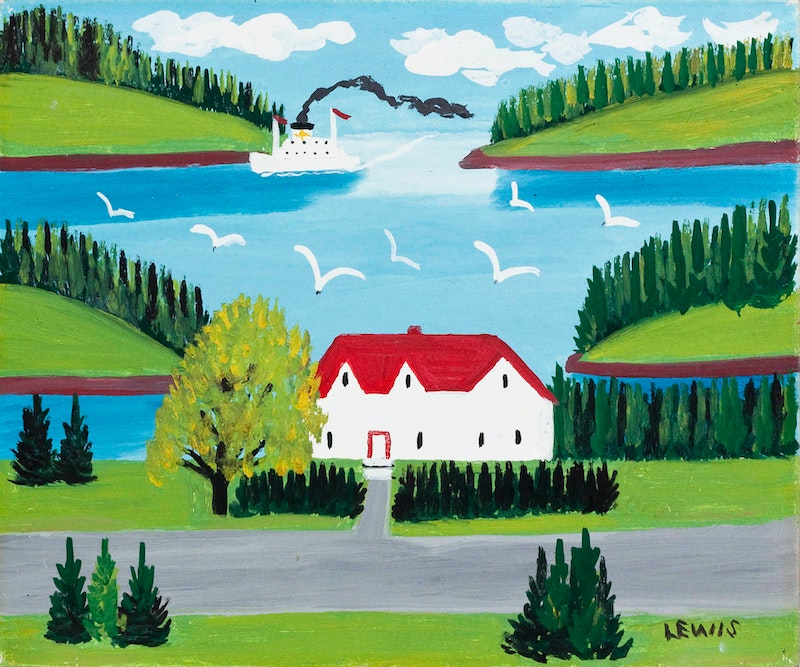 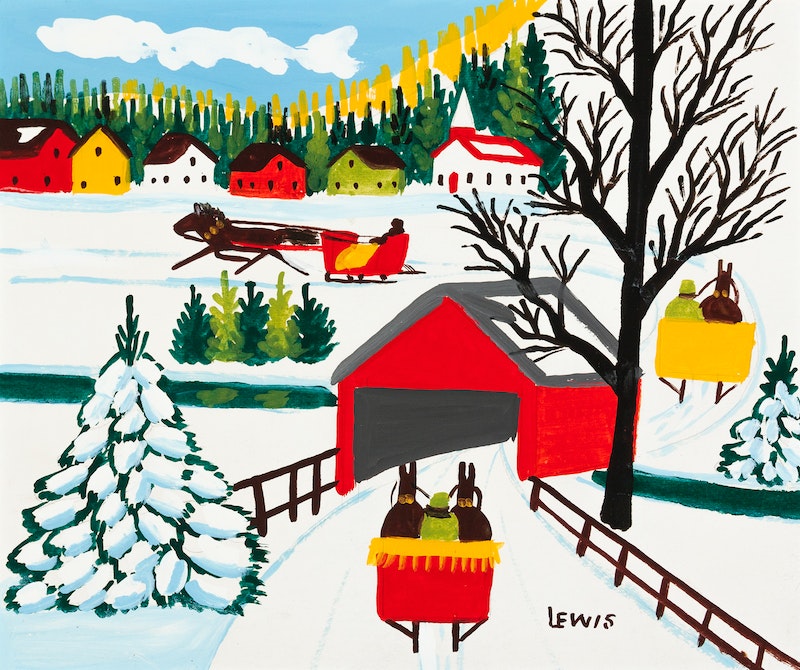 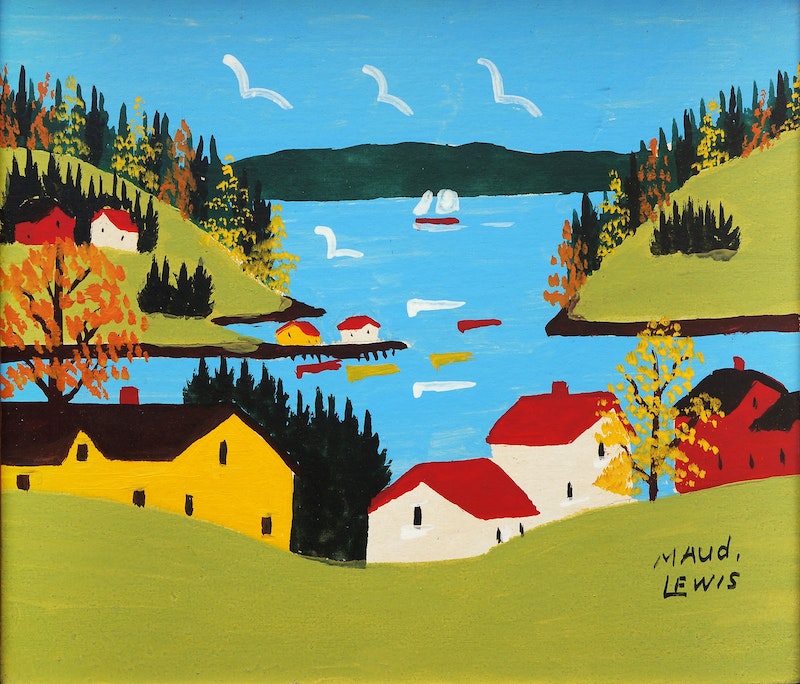 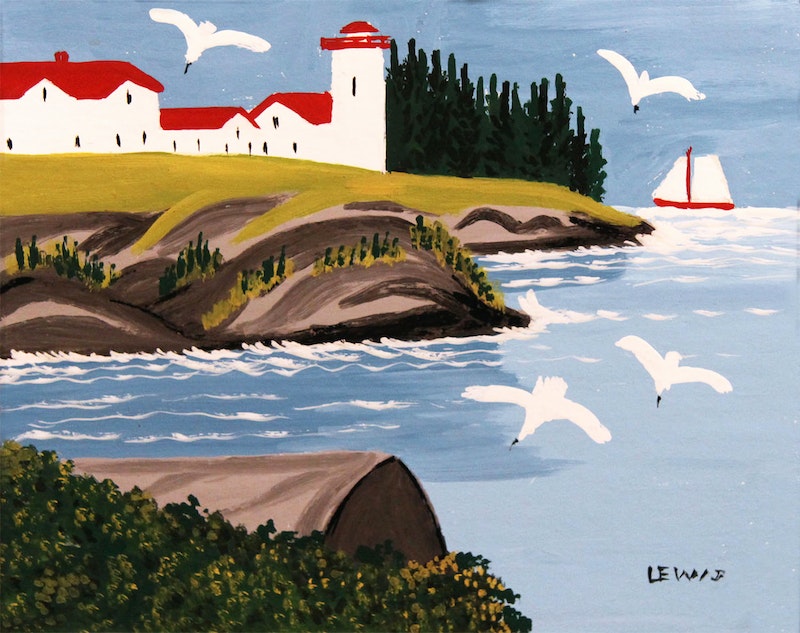 Fisherman on the Wharf (Flags)