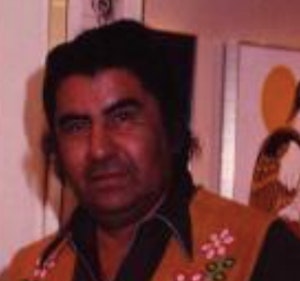 Ojibwa artist Eddy Cobiness was a founding member of the Indian Group of Seven, an association of native artists of the Woodland School. Cobiness was born in 1933 and raised in Warroad, Minnesota. After a stint in the US Army where he was a Golden Gloves boxer, he moved to Canada and lived on the Buffalo Point Reserve on the shores of Lake of the Woods.

Like many of the Woodland School artists he was self taught. He began by illustrating scenes from his community and then evolved to more abstract forms. Influenced by the work of Benjamin Chee Chee, by the 1960’s he was recognized for stylized images of animals. In an interview that was given to Windspeaker reporter David Hickey in 1992, he claimed to be much influenced by Picasso’s sparse use of line and colour.

Cobiness worked in oil, acrylic, watercolour, pen and ink and coloured pencil, signing his treaty number ’47’ to his later works. Eddy died in 1996.

Want to get notifications or exclusive online offers for artwork by Eddy Cobiness? Add them to your collector profile and let us know what you're looking for.

Browse all works by Eddy Cobiness