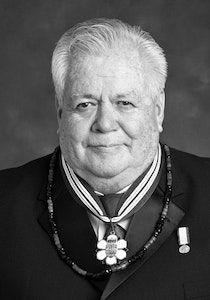 Chief Tony Hunt (b. aug. 22, 1942) Nakapnkim or Mu-pen-kim Kla-kwa dzee (four times chief big copper) was hereditary chief of the KwaGulth people of Fort Rupert and Kingcome inlet, B.C. and one of the greatest artists of the Pacific Northwest. His father (Henry Hunt), and his grandfather (Chief Mungo Martin) were the creators of Victoria’s famous Thunderbird Park. Subsequently, Tony Hunt designed the Hunt Family Big House within the Royal Victoria Museum (Royal B.C. Museum). His grand masterpiece was the KwaGulth ceremonial big house at Fort Rupert, the largest traditional native structure ever built in the Pacific Northwest.

Chief Tony Hunt was an artist all his life, and had designed and carved nearly one hundred full scale totem poles, more than any other native artist, present or past. Remarkably, the composite height of these totem poles is considerably taller than the world’s largest freestanding structure. Beyond his contributions to Canadian heritage, many of his totems have become celebrated national monuments in museums and public institutions all over the world including America, Great Britain, Mexico, Argentina, Germany, New Zealand, Japan, China, and more.

Among the many honours awarded him outside his traditional culture are: Honorary Doctorate of Law, Royal Roads College, Royal Canadian Academy of Arts, C.M.; Honorary Life Member, Alumni Association of University of British Columbia, Commonwealth Medal of Honor. Order of British Columbia, and Victoria, B.C. Citizen of the Year 2011. Chief Tony Hunt passed away in Campbell River, B.C. in December 2017

Want to get notifications or exclusive online offers for artwork by Chief Tony Hunt? Add them to your collector profile and let us know what you're looking for.