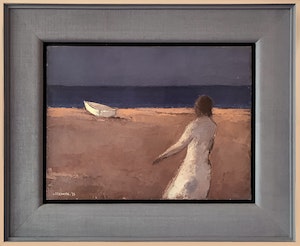 Sylvia Lefkovitz was a Canadian artist known for her murals, oils, drawings, lithos and sculptures rendered in bronze, silver, marble, and Canadian wood. Her work has been exhibited all over the world and was profiled in the National Film Board of Canada’s 1966 documentary In Search of Medea: The Art of Sylvia Lefkovitz.

Among her major pieces are the five-figure bronze Chorus, commissioned for the Mies Van der Rohe complex in Montreal’s Westmount Square; her Fathers of Confederation, commemorating the 1967 Canadian Centennial; her eighty-figure Divine Comedy, purchased by the Canadian government and exhibited in the Dante Room of the Royal Palace in Milan on the occasion of Dante’s 700th birthday; and her eight bronze biblical panels in bas-relief, inspired by Ghiberti’s Bronze Doors on the Florence Baptistery.

Want to get notifications or exclusive online offers for artwork by Sylvia Lefkovitz? Add them to your collector profile and let us know what you're looking for.

Browse all works by Sylvia Lefkovitz