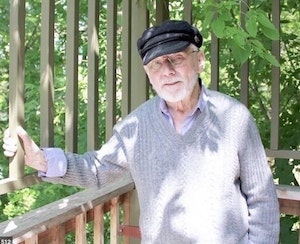 Born in Poland, Roman Świderek began his career painting backdrops for the professional theatre group in his town, Lodz. His talents received early recognition and he refined his skills in a studio provided by his company. After immigrating to Canada in 1961, his artistic skills evolved while painting religious icons for churches, portraits of national leaders and set designs for theaters including Rainbow Stage, the Manitoba Theater Centre and the Royal Winnipeg Ballet. From 1965 to 1989, Świderek founded four companies with a design focus for the fashion industry in Winnipeg including the Hudson’s Bay Company blanket division.

Travelling extensively from east to west and learning about this country has allowed him to paint and display images of Canada. Roman Swiderek works with drawings, oils and watercolour. His art is found across Canada and abroad.

Roman is best known for his impressionistic scenes of Winnipeg and its’ landmarks from past and present. For many Winnipeggers, images of Assiniboine Park, the Bridge Drive-Inn, The Forks and Morning Practice on the rink, conjure a familiar rhythm. Skillfully rendered in oils, these finely observed paintings frame Winnipeg through the past decades and present a view of our great city through the eyes of an exceptional artist. Swiderek passed away in 2020.

Want to get notifications or exclusive online offers for artwork by Roman Swiderek? Add them to your collector profile and let us know what you're looking for.

Browse all works by Roman Swiderek