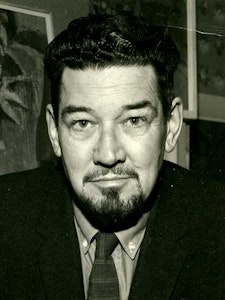 The influential Western Canadian artist Robert Bruce (1911-1980) was born in Grandview, Manitoba, and grew up in Winnipeg.   As a young man, he attended the Winnipeg School of Art under L.L. Fitzgerald.  With the help of a bursary, he later traveled to Europe, studying at the Central School of Art in London and the Academie Grande ChaumiÃ¨re in France.  Like other artists of his generation, he wished to help in the war effort and enlisted in the Canadian Military.  He distinguished himself as a public relations staff artist, participating in a prestigious war art exhibition that opened at the National Gallery of Canada.

Following his discharge from the army, he moved to New York to work and study at the Art Student’s League.   There he met fellow student George Swinton with whom he would later teach at the University of Manitoba School of Art.  While in New York his illustrations were published in leading publications such as Life, The New York Times, Harpers, and McLean’s.

After his retirement from the UofM in 1976, he divided his time between Falcon Lake and San Miguel de Allende, Mexico, which had an active artists’ enclave.  He died there in 1980.  Robert Bruce was posthumously honored by the Winnipeg Art Gallery in 2004 with an exhibition called The Art of Robert Bruce.

Want to get notifications or exclusive online offers for artwork by Robert Bruce? Add them to your collector profile and let us know what you're looking for.

Browse all works by Robert Bruce