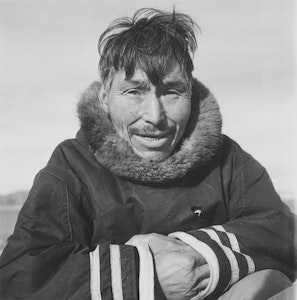 Kiakshuk (1886 – May 3, 1966) was a Canadian Inuit artist who worked both in sculpture and printmaking.Kiakshuk began printmaking in his seventies and, is most commonly praised for creating “real Eskimo pictures” that relate traditional Inuit life and mythology.

In 1920, Kiakshuk had a dispute with Ohotok, the husband of both of his sisters Ekateelik and Napatchies. Ohotok promised Kiakshuk the hand of his own sister, Mary, but since Mary was already married to another man named Napatchie Ottochie, the agreement fell apart. When Napatchie died in a hunting accident, there was a rumor that Kiakshuk, a shaman, had caused his death.

In 1958, Kiakshuk appeared in the film The Living Stone, produced by the National Film Board of Canada.In the film he tells Inuit folk tales, sings traditional songs, and discusses the importance of sculpture to a group of children.

Kiakshuk learned printmaking from James Houston, an artist who was hired by Canadian federal government to develop Inuit art and craft production in the far North. Houston was working in the South Baffin Island region, Kiakshuk’s home, beginning in 1956.Houston established an artistic co-operative in Cape Dorset in order to encourage Inuit art. After traveling to Japan in 1958 to study with Sosaku-hanga movement artists, including Un’ichi Hiratsuka, Houston brought back printmaking techniques to the co-operative.Since wood is rare in Cape Dorset, many of the Japanese printmaking techniques Houston taught to Inuit artists had to be adapted to local materials, leading Kiakshuk and other artists to practice stonecut printmaking. Unlike traditional Japanese woodcut prints, Inuit artists tend to carve just one block for printing and apply all colors to the same block.

Kiakshuk also sold his drawings and prints for use in book publication, such as Eskimo Songs and Stories, published 1974. In 1979 one of Kiakshuk’s prints was featured on a Canadian postage stamp. American rock band DIIV used Kiakshuk’s artwork on the cover of their 2012 album Oshin.

Add Kiakshuk to your Collector Profile

Want to get notifications or exclusive online offers for artwork by Kiakshuk? Add them to your collector profile and let us know what you're looking for.

Browse all works by Kiakshuk