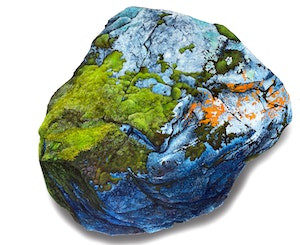 Greg Allen is a painter based in Moose Jaw, Saskatchewan, Canada. Allen has a keen interest in the detailed beauty of the natural world, primarily focusing on the northern Saskatchewan landscape within the Precambrian Shield. Through personal exploration of the land and a lifelong connection to the Boreal Forest of Northern Saskatchewan (Treaty 6 territory), he has made the shorelines of the Canadian Shield the main muse for his recent work.

Allen explores avenues of perception with his paintings, using aspects of illusion and precise mark-making to pronounce his subject matter. He is keen to showcase the variance of life-forms that make up the details within a landscape.

Born in Regina SK, in 1982, Greg Allen considers himself a lifelong artist. He studied drawing and sculpture at the University of Regina, but tailored his love of painting through self taught exploration. Since beginning his foray into painting in 2015, Allen’s work has toured Saskatchewan through OSAC’s ‘Arts on the Move’ program. He has presented multiple solo exhibitions and his work has been featured in nature books and magazines. Allen has made appearances in film projects like CBCArts’ television program ‘The Exhibitionists’ and other local media.

Want to get notifications or exclusive online offers for artwork by Greg Allen? Add them to your collector profile and let us know what you're looking for.

Browse all works by Greg Allen