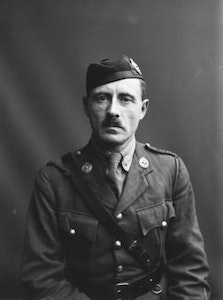 Cyril H. Barraud (1877-1965) was a British artist and graphic designer. Born in Barnes, London, nephew of the painter Francis Barraud (1856-1929), Barraud attended Downside School for Boys. He studied at Brighton School of Art and initially worked in his father’s photographic business before emigrating to Canada and settling in Winnipeg, Manitoba in 1913. There, Barraud taught at the Winnipeg School of Art where his artistic influence had great impact on the community, which included Walter J. Phillips, to whom he taught etching. He served as President of the Manitoba Society of Artists and Craftsmen as well as founding the Winnipeg Art Club. During WWI he served with the Canadian Expeditionary Force and the Artists’ Rifles and after being wounded, became an Official Canadian War Artist. Barraud’s work is held in the Canadian War Museum and the National Museum of Canada.

Want to get notifications or exclusive online offers for artwork by Cyril H. Barraud? Add them to your collector profile and let us know what you're looking for.