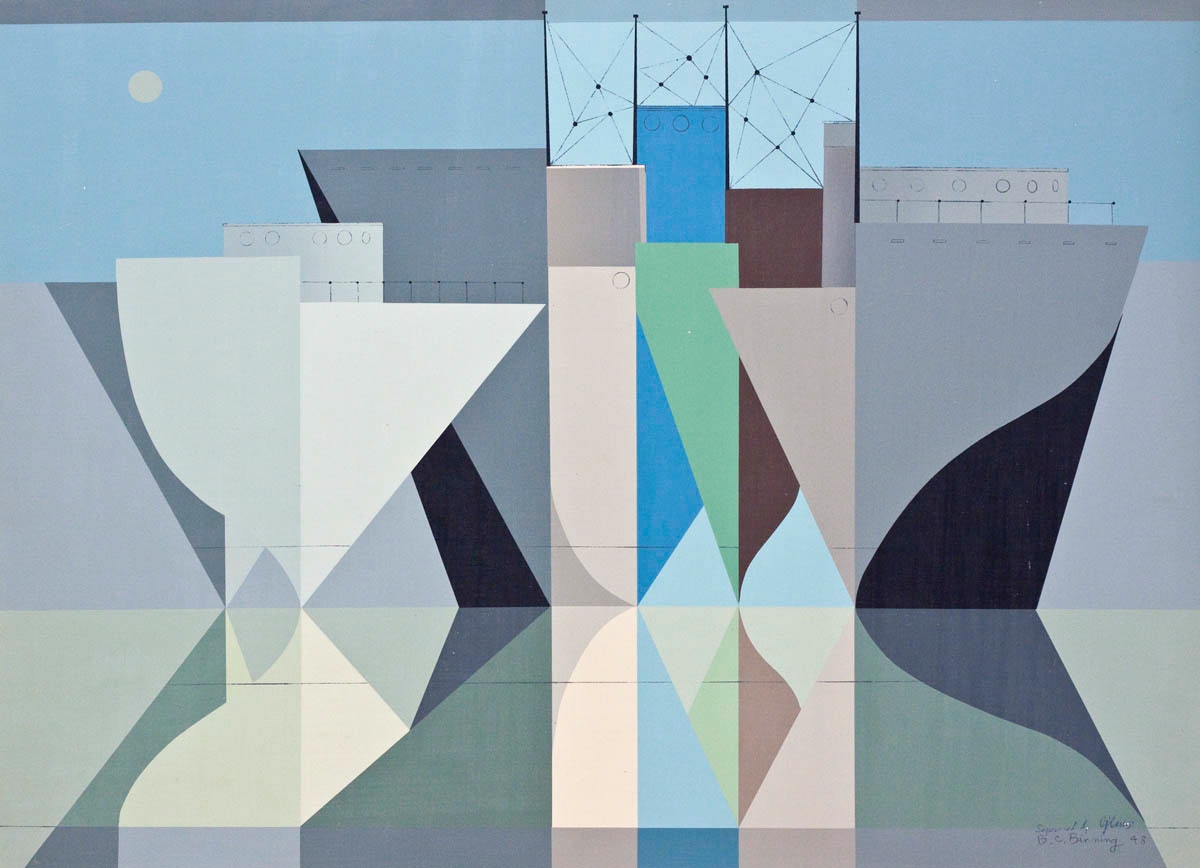 Bertram Charles Binning, also known as B. C. Binning, was a leading Canadian artist known for his paintings and drawings. Born in Medicine Hat, Alberta, in 1909, Binning was known for his intricate line drawings that captured his experiences and surroundings with humor and love. His drawings often depicted unusual hotel rooms, peaceful female figures, and architectural drawings of streets in Vancouver. In addition to his personal artistic practice, Binning was known for his hospitality to students, colleagues, and world figures, and for his collaborative personality.

Binning’s paintings, which were exhibited internationally, were composed and formal but also captured the leisurely weekends he spent sailing the B.C. Coast with his wife, Jessie. His nautical themes and layered, regal ship forms revealed his unique architectural style, often featuring primary colors and shapes inspired by the coast he knew best.

Binning’s contributions to the art and architecture scene in Vancouver placed the city on the cultural map internationally. In 1946, he co-founded the Art in Living Group and participated in a major show, Design for Living, at the Vancouver Art Gallery in 1949. He also played a role in the negotiations for the Nitobe Garden at the University of British Columbia (U.B.C.) and founded and presided over the U.B.C. Festival of the Contemporary Arts, a yearly avant-garde celebration that took place in the 1960s. He later helped establish the Department of Fine Art at U.B.C. and served as its head. Binning received numerous grants, awards, fellowships, and one-man shows, and was named an Officer of the Order of Canada in 1971. He retired in 1974 and passed away in 1976. In 1997, the Bauhaus-influenced home Binning designed for himself in West Vancouver was declared a National Historic Site of Canada. His work continues to be exhibited regularly in Metro Vancouver, including at the Vancouver Art Gallery, Burnaby Art Gallery, and West Vancouver Museum and is part of The Artists4Kids Trust.

Want to get notifications or exclusive online offers for artwork by Bertram Charles Binning? Add them to your collector profile and let us know what you're looking for.